When the Steelcity Electronics DaVinci 3D printer landed on my workbench for a short stay I got to browsing Thingiverse. Initially this was more out of curiosity than with an intent to find a printing project. My day job involves a lot of CAD work with Solidworks so I am quite capable of developing my own designs and I did have a couple of projects in mind. However I soon discovered the Ultimaker 2 Aluminium Extrusion 3D Printer by  jasonatepaint. 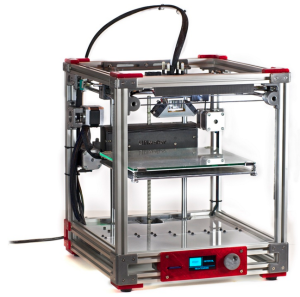 Since the very early days of 3D printing I had my eye on Ultimaker as an excellent option for an FDM style printer and now here was a chance, in true RepRap style, to use the 3D printer I had on loan to print myself a 3D printer using all the best bits of the Ultimaker 2. I must also say that specific use of the Ultimaker parts is only possible due to the great attitude and continued openness that Ultimaker the company maintains for the community it was born out of. If I could support them directly with the purchase of one of their printers then I would but the value proposition here in Australia is just not there for me presently.

For my build I decided to make a couple of changes to the default spec. Firstly and most obviously I am building an ‘extended’ version. At the moment I am not sure exactly how much Z-axis travel I will have but it will be even more than the official UM2 extended model. The screw I purchased is 500mm long, useable travel I expect will be about 450mm. Exactly why I have made it so long has no good reason other than the price difference being negligable. Hopefully there are no ill effects from the extra height. 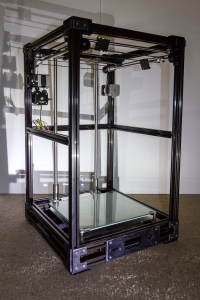 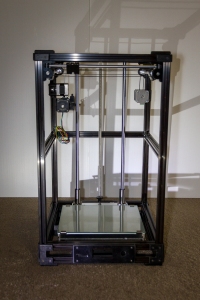 The second change I have made is to the hot end. I am using the E3D V6 rather than the standard Ultimaker hot end. I’ve got no immediate requirement for this but decided that it would be good to have the extra flexibility that the all metal hot end offers in place from the start. To mount this I am using the E3D Custom UM2 Mount by lions3.

Not discussed in Jason’s build guide is the possibility of screwing the frame members directly to each other rather than relying on the plastic joiner pieces for a solid corner. This is achieved by tapping the center hole in both ends of every cross member. A clearance hole for the hex drive required on an M6 button head socket screw is then drilled through the vertical member at the point at which the member is to be positioned. The M6 button head is then screwed in to the end of the extrusion before sliding the head into the v-groove of the vertical member and tightening it at the appropriate position. On top of this I also have aluminium corner fittings which I picked up cheaply with my order from RobotDigg. These are not installed in the photos here but will provide an even stronger joint. This approach actually makes a lot of the plastic joiners redundant but I have kept them in place for now. I will print some cosmetic replacements when the machine is operational.

I have already made modifications to some of the printed parts. STL files for each can be found on my remix of Jason’s design on Thingiverse.

Currently I have all the mechanical parts in place for a temporary fit and alignment checking build and everything is looking good. I am waiting on the last couple of parts to arrive from China, specifically the electronics. When they arrive I will check they fit before striping everything down and rebuilding it in a functional state. After wiring it up it should be basically functional. Before I call it complete though I will also make acrylic panels to enclose the build space (primarily for improved thermal stability), add LED’s and change the joining pieces as previously mentioned.