After receiving my crash kits for the VersaCopter I have rebuilt it without any further drama. The only change made on the rebuild was to flip the orientation of the capacitors across the power input on the two ESC’s adjacent to the flight controller. They now rest back over the top of the ESC rather than poking out along the wires. As previously mentioned they were causing interference problems with the USB connector and various other connections on the flight controller. No such problems exist now.

Also rebuilt over the weekend was the Spidex 220, when I last flew that I took off aggressively thinking it was in angle mode when in fact it was in rate mode. Needless to say the quad flipped on its head and smashed in to the ground. Thankfully nothing beyond the propellers was actually broken but the force of the crash was enough to pull it to pieces so I thought a full workbench rebuild was a wise choice to ensure there wasn’t any hidden damage.

Now having them both built I could get a photo of them together for a size comparison.

I also tried to get a buzzer working on the CC3D mini in the Spidex 220 whilst it was on the bench again but so far have not had success. The best way I have seen to achieve this is to move the buzzer output to motor channel 6 with a custom build of Cleanflight and a transistor to switch the buzzer. After having put everything in place as required it doesn’t work but I am unsure at the moment which piece of the puzzle is at fault. More investigation will be required. For now an external battery monitor on my new higher discharge rate batteries will suffice. 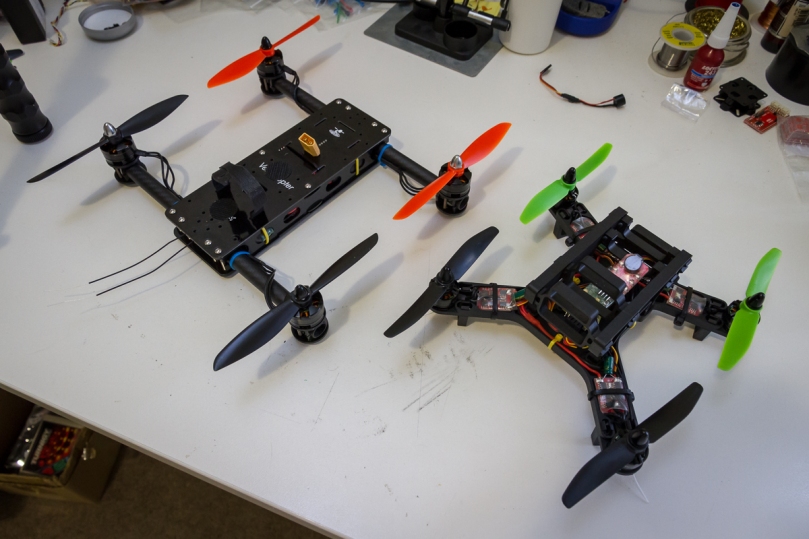