After coming across a great deal on most of the flight hardware for a Spidex 220 and realising I already had all the other required pieces to get it in the air I now have another mini quadcopter. For $130aud I got my hands on:

To get it in the air I already had:

As with the VersaCopter, at this stage i have built this up without any FPV or camera equipment, that’s an expense for the future. 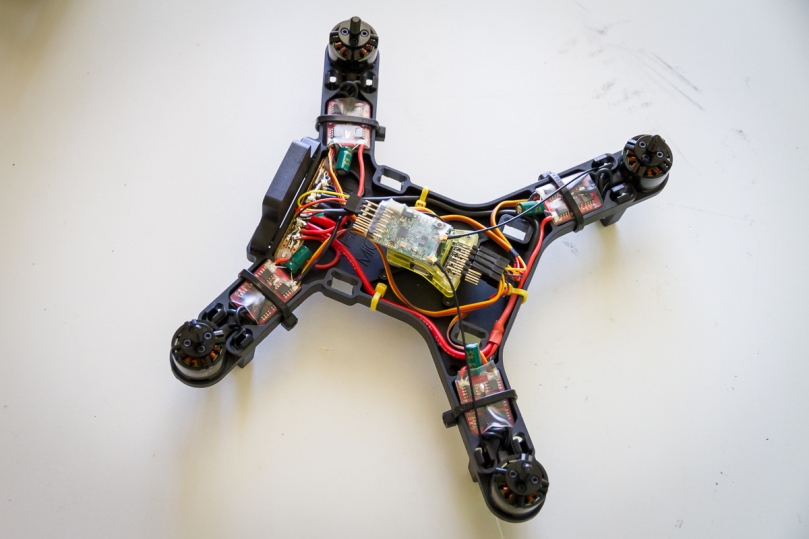 How to tackle power distribution and connection proved to be the biggest question of this build. Seen above is the solution I came up with which I think is really quite tidy. The rear two motors are joined together with another wire which travels forward to the power distribution board. In previous builds I have always been frustrated by the process of trying to solder multiple wires together, even two can be a frustrating experience. This time around I made a point of seeing how others tackled this problem and very quickly came across a wire wrapping method. The Flite Test crew illustrate it succinctly in the video below.

Using this method, and even splitting it  into two stages, I found the process much more agreeable. The +ve and -ve runs are mirrored with one up each side of the frame. A couple of holes were drilled into the base plate to hold zip ties in critical locations. 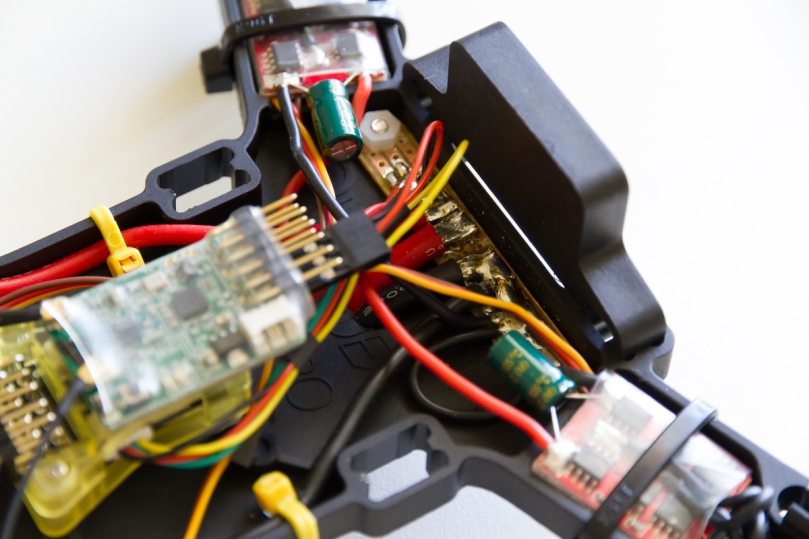 The wires from the rear motors meet the battery wires and front motors at this small power distribution board made from a piece of strip board. The copper strips aren’t really carrying much of the power it simply provides an easy foundation onto which each wire can be joined. Also hinted at in the photo above is the fact that I have routed the battery wires through the base plate. This seemed the only tidy way I could route them whilst providing enough tension that the battery leads be pulled out of range of the propellers.

The battery connector flies freely out the bottom of the craft but is pulled taught when a battery is connected.

To fit the FrSky X4R receiver between the flight controller and the battery I striped it of its carboard housing and replaced it with heat shrink, using double sided tape it is then attached directly to the housing for the CC3D mini. For a tidy install I also shortened the wires from each ESC. On all but one connector the +5v wire is also removed and held back with a small loop of heat shrink. I have changed the software on the CC3D mini over to CleanFlight due to my familiarity with that. Installing it was quite simple using the OpenPilot bootloader and flashing software. In the future I would also change over to a CleanFlight bootloader as my experience with that on NAZE32 hardware is a little smoother.

To fit the ESC’s in to the designated spots on the arms the outer corners of the ECS’s need to be trimmed slightly. A cut out in the cross member on the frame was also required to pass the signal wire from the bottom of the board. The motor wires are soldered directly to the ESC and by paying attention to which wire was going where I was able to get a pair of CCW rotating motors and a pair of CW rotating motors without having to rework the soldering.

Initial flight impressions are a bit limited so far due to windy days but from what I have experienced it is a very punchy little rig. I am seeing some vibration induced instability/oscillation at hover which will need some work and the tuning could also do with a touch up. All in all though, a very fun little platform that I’ve picked up for minimal outlay.